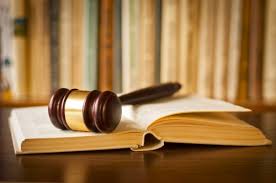 Therefore, since we have been justified by faith, we have peace with God through our Lord Jesus Christ.  Romans 5:1

One of the aspects of our faith is that God credits His righteousness to us through what Jesus did when He shed His blood for us and was raised from the dead.  Jesus was the perfect sacrifice for our sins to pay the debt of sin that we could not pay.  Romans 5:1 tells us that we are justified.  To be justified means that we are declared righteous by God, because we have been made righteous by the blood of Jesus.

This presents a legal view of our sins.   Picture a court room.  You are standing before a judge because you stole something.  The judge asks how you plead and you say, “guilty.”  You know you deserve the punishment for breaking the law, if you are honest with yourself.  The judge is fulfilling justice by inflicting a consequence upon you.

We are all guilty of breaking the law because, as Romans 3:23 tells us, “All have sinned and fall short of the glory of God.”  Some people think that they aren’t all that bad so they really don’t deserve God’s punishment as the judge of all.  They maybe took something that wasn’t theirs, or told a white lie, but that isn’t as bad as some people.  But James 2:10 says, “For whoever keeps the whole law but fails in one point has become accountable for all of it.”  You would have to be perfect, and no one is.  So if we are standing before God our judge and He asks how we plead, we would all have to say, “guilty.”

Romans 6:23 declares, “The wages of sin is death.”  We deserve the penalty of Hell.  Our sin has made us enemies of God and we are objects of His wrath.  We have the problems that we have inside and out because we lack peace with God, because we are alienated from Him, far away, and nothing can still our conscience that calls out to us late at night.

God as judge bangs His gavel and is ready to deliver  the sentence of death.   But for those who call on Jesus as their Savior, a beautiful thing happens.  God says, “You are guilty, but I have someone who paid the penalty for you.  You are free to go.”  Jesus steps out and clears our record and stamps our debt  “paid.”  That’s what it means to be justified. And because of that, we can have peace, peace with God.  You can’t get that peace from drugs, alcohol, shopping, or anything else.  It’s a peace that comes from our debt being paid and us going from being legally guilty to being declared free.

I am an avid student of the Bible, having studied it diligently for over 40 years. More than that, I love Jesus and want to know Him and to show Him in my life. I am currently in the education field as an Elementary Principal, having degrees in School Counseling and Administration. I have a post graduate degree in Child and Adolescent Mental Health from Bethel University in St. Paul, MN. I have also gone to Bible school at the Columbia Graduate School of Bible and Missions (now Columbia Biblical Seminary) in Columbia, South Carolina and spent summers in youth ministry as well as five years as a youth director in a Baptist General Conference church. END_OF_DOCUMENT_TOKEN_TO_BE_REPLACED
This entry was posted on Saturday, January 7th, 2017 at 10:02 pm and tagged with Hope, justified, peace with God and posted in Bible, Christian, Christianity. You can follow any responses to this entry through the RSS 2.0 feed.
« What’s Faith Got to do With It?
Let the Holy Spirit Be ‘Large and in Charge’ »