Grumbling: Rebelling with our attitudes and our words

Therefore, when the Lord heard (their grumbling) He was full of wrath; a fire was kindled against Jacob; His anger rose against Israel, because they did not believe in God and did not trust His saving power.  Psalm 78:21-22

The verses just before this explain, “God made streams come out of the rock and caused waters to flow down like rivers.  Yet they sinned still more against Him, rebelling against the Most High in the desert.  They tested God in their heart by demanding the food they craved.  They spoke against God, saying, ‘Can God spread a table in the wilderness?’”

This took place in the wilderness, when the children of Israel were in between Egypt and the Promised Land.  They grumbled and rebelled against God.  They tested God in their heart by demanding things of Him that they thought they were entitled to.  They sinned by speaking words of unbelief and complaining. 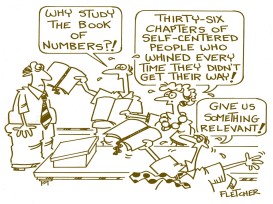 Have you ever complained about your circumstances?  We think we’re just venting, but really, we’re saying “God, You’re not good.”  And we can pray demanding prayers that are really complaints to God, saying what He is giving us isn’t enough.  And we tell ourselves and others that we really can’t trust God.  It is rebellion and it angers God.  Really–have you listened to yourself when you grumble?  Stop it.

In response to Israel’s attitude, God was not only full of wrath, but a fire was kindled against Jacob.  That means that it was the start of God working against the Israelites, not for them.  That is never good.  But verse 23 has a merciful tone, in spite of God’s wrath being kindled: Yet He command the skies above and opened the doors of Heaven, and He rained down on them manna to eat and gave them the grain of Heaven.

In other words, in spite of their lack of trust, reflected by their venting–God was still good to them!  Even when they didn’t deserve it, God gave them bread from Heaven to eat.  That is grace, giving us good gifts that we don’t deserve and didn’t earn.  It was also mercy, not giving them what they did deserve.  In Psalm 103:9-10 there are beautiful words of God’s character, “He will not always chide (accuse), nor will He keep His anger forever.  He does not deal with us according to our sins, nor repay us according to our iniquities.”

We can anger God with our testing Him, saying that the weather stinks, our job is rotten, and we wish we had more of just about everything–money, vacation, or friends.  It’s not just run of the mill complaining, it is a lack of trust in the goodness of God.  But in the middle of it, God is still good to us, giving us our daily bread and not giving us what we deserve.

Praise God for this!  We’re just like the Israelites, rebelling and grumbling.  God does something big and then we forget and whine for something bigger.  When we deserve to get wiped out, He opens the skies and rains down goodness upon us.  He is merciful and gracious, slow to anger and abounding in love.

I am an avid student of the Bible, having studied it diligently for over 40 years. More than that, I love Jesus and want to know Him and to show Him in my life. I am currently in the education field as an Elementary Principal, having degrees in School Counseling and Administration. I have a post graduate degree in Child and Adolescent Mental Health from Bethel University in St. Paul, MN. I have also gone to Bible school at the Columbia Graduate School of Bible and Missions (now Columbia Biblical Seminary) in Columbia, South Carolina and spent summers in youth ministry as well as five years as a youth director in a Baptist General Conference church. END_OF_DOCUMENT_TOKEN_TO_BE_REPLACED
This entry was posted on Monday, December 4th, 2017 at 10:09 pm and tagged with Grumbling, Psalm 78:21-23, Trusting God and posted in Bible, Christian, Christianity, Devotional, God's Grace, The Christian Life, Trusting God. You can follow any responses to this entry through the RSS 2.0 feed.
« Not Good if Detached
Guarding and Storing »